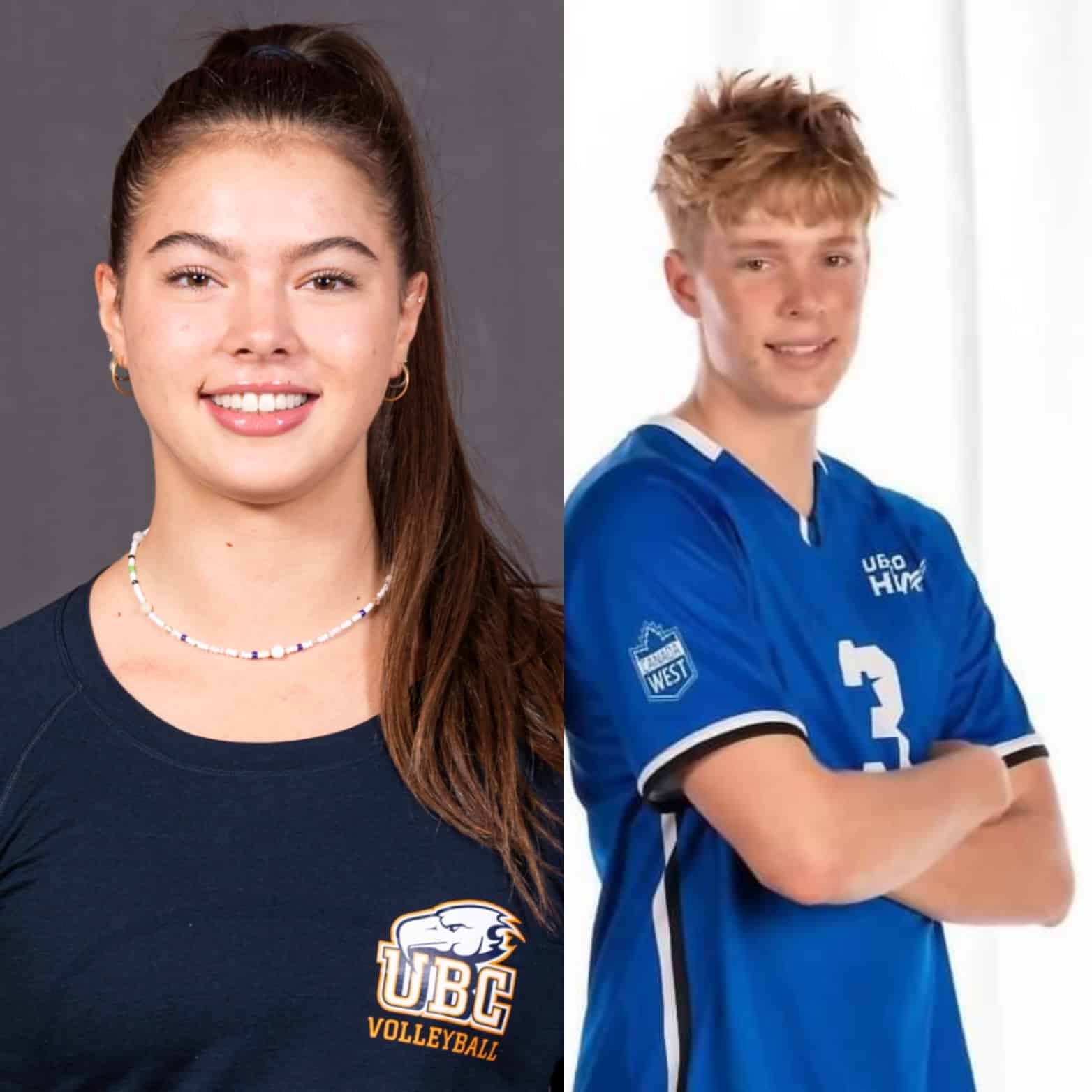 Volleyball BC has selected Lucy Borowski and Lucas Woelders as the 2022 recipients of the annual Ray Lepp Scholarship. The $2,000 scholarships are awarded each year to a post-secondary male and female athlete who meet the scholarship criteria and show promise of competing for Canada at the national team level.

Selected from a group of very strong applicants, these athletes have shown a tremendous amount of dedication and commitment to the sport of volleyball and have received numerous accolades for their accomplishments.

This year’s female recipient, Lucy Borrowski, is a second-year outside hitter at the University of British Columbia (UBC). Lucy has a strong history of success at the high school and club level capped off with her winning a BC Girls AAA provincial championship in 2019 with Little Flower Academy. She has participated with Team BC for over 5 years, both indoor and beach, where this past summer she helped guide BC to a bronze finish at the Canada Summer Games. Her accomplishments continue at a national level where she has participated in Volleyball Canada’s National Excellence Program (NEP) as well as participated with the Canada 21U national team.

Male recipient Lucas Woelders is a first-year outside hitter at University of British Columbia Okanagan (UBCO). The graduate of Langley Christian Secondary and the Fraser Valley Volleyball Club has numerous provincial medals, and all stars awards highlighted by a 2022 Club Provincial Gold Medal and All Star nomination. He was a BC Boys top 5 graduating player for the age class, and represented BC at the 2022 Canada Summer Games.

Ray Lepp was a founding member of Volleyball BC (formerly BC Volleyball Association) in 1965, and continued as a Board Member until 1978. He was the President and/or Vice President for 10 of his 22 years a Board of Director. In his early years Ray played volleyball in Estonia in a very strong school and club system. Having recognized that the profile of volleyball in Canada was lower he worked tirelessly to increase interest in the sport. Some of the major programs for the Association included recruiting international coaches to BC, the Winfield Volleyball Camp, and the Pacific Rim Championships.

Ray was certified as a National Official during the time of the Pacific Rim Championships and traveled to the tournament as head of delegation for the Pacific Rim program. During the 1960’s and 1970’s, Ray coached the UBC Men’s Volleyball Team for a total of 10 years. At one time, six players on the Canadian National Team had been coached by Ray at UBC.

In 1989, Ray helped to fundraise some money for the Estonia National Team, who was touring BC, and whose flight was suddenly stopped in Toronto. With the raised funds and Ray’s personal contribution, the team made it to BC. With Ray’s passing, he donated funds through his will to provide a permanent endowment that would support this scholarship in perpetuity.