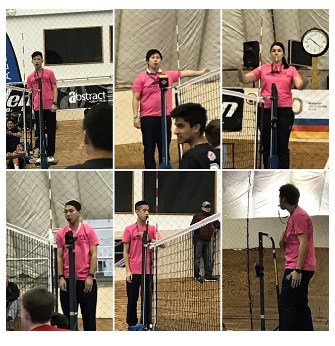 Note: Referees’ names have been changed  for anonymity purposes. All bullying incidents are from a referees’ perspective and not intended to offend, but rather to give the public insight into what referees go through.

Imagine this, you’re 16-years-old and working as the R2 (second referee) in a gym full of kids you go to school with, refereeing your own school’s Senior Boy’s Team, in one of their biggest games of the season.

Halfway through the first set, in a 9-9 game, the scorekeeper approaches you and notifies you that they don’t have the server on the lineup card you signed off on before the game.

You freeze with fear, as you realize the consequences of an error that is partially your fault, is the loss of nine points for your school’s team. The game is now 9-0 for the other team.

“I’m going to report you,” shouts the senior boys team’s head coach, who is also your fourth period biology teacher, as he points at you in front of a gym full of classmates and friends.

This is followed by the captain of the team, a classmate, stopping the game to ask the R1, (first referee) isn’t this your fault?

This scenario may seem unrealistic, but it is exactly what, ‘Sara’, one of Volleyball BC’s referee had to go through a few years back in the heat of an important game.

“I tried my very best to keep my composure, but I do tend to be the type of person who wears their emotions on their face,” said Sara. “In the gym I tried to keep calm, but it did impact my confidence as a referee and once I was alone, I cried.”

The error also left Sara with a short-term feeling of guilt and inadequacy as a referee, but that feeling passed later on that evening when the coach who shouted at her earlier, tracked her down, and apologized for his actions, calling them not appropriate, as well as, several of the boys on the team admitting to her that it wasn’t her fault they lost the points.

Through this experience and talking with other more experienced referees, Sara learned a few lessons.

“I learned to never escalate any situation and admit my faults as soon as they come up,” said Sara. “And, anyone can tell you you’re inadequate, but as long as you believe in yourself, you can improve as much as you want to as a referee.”

“The only person who can make you quit refereeing is you.”

‘Peter’ has also seen his fair share of bullying incidents on the court in his 14 years of refereeing and it’s often because of his experiences playing and coaching, he has no problem seeing all sides of the disagreement.

He hopes by sharing his wisdom that it helps young referees better deal with the handful of the hot-headed coaches they’re bound to encounter during tense moments of big games, and thus keeps them refereeing for years to come.

“There’s instances where I’ve seen referees quit a week before their certification or take a year off of refereeing because of a traumatic encounter with a coach,” said Peter.

His advice to young referees, stick with it and try to learn from the encounters you have with coaches.

“It took me a good four or five years before I was confident standing on the stand, being able to have that conviction to know that I’m doing the best I can, my decisions are appropriate and that the bullying is wrong.”

He also added, the feeling of self doubt a lot of younger referees feel is normal and rather than focusing on the bad calls you’ve made after a game, try to think about all the good calls you made, and the positive impact you had on the game.

“I find a lot of the time, the feedback we get as referees is, ‘this was wrong, this was wrong and this was wrong’, but we never get the ‘you did this really well’ feedback,” said Peter. “And that’s a hard thing for anyone to get when you’re starting out at a new job.”

Peter is also quick to remind his fellow referees that sometimes we need to remember not everyone at the tournament is at the point in their career where they are a National Level Referee. Occasionally, less experienced referees will make a bad call and it’s up to senior level referees to build up our younger referees, and not take a, ‘You have to be perfect or you can’t ref with me,’ approach.

He also acknowledged that because of his experience, even he will occasionally be numb to the bullying coaches try to get away with during a game. And, it’s up to senior referees to set the tone for younger referees.

“More experienced referees need to set the example of how to deal with coaches who bully, because it shows young referees that the way the coach is behaving isn’t okay and this is how you go about handling a coach when they cross the line.”

Reminder from Volleyball BC

Volleyball BC would like to remind coaches, players and fans that Volleyball BC referees go through stringent training and tests to become referees and that all referees do their very best to make sure each match is officiated evenly, with as few mistakes as possible.

Our referees are people, like you and I, and as so, they have feelings. They should be treated with the same respect that you would show to your grandmother, grandfather, wife, husband, boss, co-worker, child, teammate or friend.

No referee wants to make a mistake. And when one is made, they are often the hardest on themselves for the mistake. They don’t need someone else piling on and adding to their guilty feeling.

So next event you’re at, make sure to thank the referees and highlight the hundreds of calls they got right, rather than the one call that you disagreed with.

After all, they’re just like you, and doing the best job they can.

Volleyball BC encourages anyone who has been bullied to come forward and talk to someone about their experiences and how they are feeling. Talking about ones experiences has been shown as an effective way to relieve some of stress and second guessing that bullying can cause a person.

We fully support our referees in any way that we can.

Volleyball BC has no tolerance for bullying at their events and recommends Volleyball BC referees deal with bullying in the following manner:

Step 1. If you’re comfortable with doing so, stay calm and let the bully know you are not okay with how they are treating you and it needs to stop – preferable in a public place with someone to support you.

Step 2. Talk to a senior referee about your experience and ask for their thoughts on the situation and decide if you need to file a complaint.

Step 3. If you feel it’s needed, request an incident report form from the tournament or site coordinator and email it to the Referee Development Manager, Glenn Wheatley.