The Jim Clive Cup is the third event of the Volleyball BC Beach Tour and is named in honour of Volleyball BC Hall of Fame member Jim Clive who has been a long time advocate for beach volleyball in B.C. The tournament takes place June 15th & 16th at famous Kits Beach in Vancouver, B.C. This event has a $2500 prize purse.

This event features both 1 & 2 star events.

The 2 star event will be 32 teams in both the Men’s and Women’s divisions. The tournament begins on Saturday June 15th with pool play,  and then playoffs. Semi’s and Finals are played Sunday June 16th on the feature court for tier 1.

The 1 star event will be a max of 24 teams in both the Men’s and Women’s Divisions. The tournament will be a 1 day event with pool play and playoffs played on Sunday June 16th.

This event is FREE for spectators, so bring the family down for a day of fun at the beach and catch some great volleyball action. 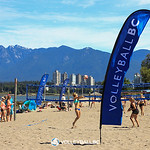